The graph below shows the proportion of the population aged 65 and over between 1940 and 2040 in three different countries. 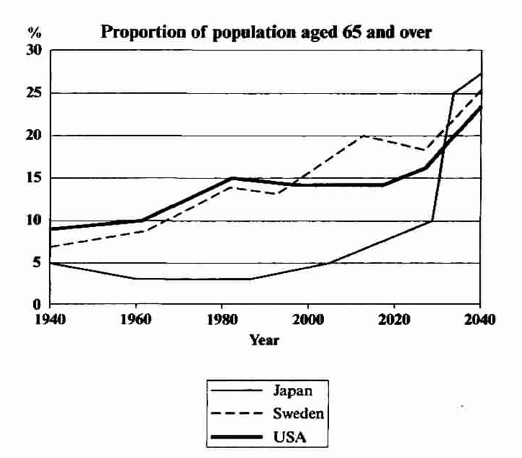 The provided line graph illustrates the proportion of senior citizens between 1940 and 2040 in Japan, Sweden, and the USA.

It is noticeable that the percentage of the elderly in the three countries rises significantly over the given period. Also, Japan is predicted to be the country with highest proportion of people aged 65 and over while the opposite is true for the USA in 2040.

In 1940, approximately 9% of American population was 65 years old or over whereas the figures for old people in Sweden and Japan were 7% and 5%, respectively. Over the next 60 years, the percentages of the elderly in Sweden and the USA increased gradually and stood at around 15% in 2000. Meanwhile, Japan experienced a decline in its elderly population to 3% in 1980 before the figure went up gradually to almost 5% in 2000.

The proportion of elderly people in Japan is expected to grow significantly to almost 20% in 2040, making it the nation with largest population of senior citizens. The figures for the USA is forecast to climb continuously to 23% in 2040 and about a quarter of Swedish population is anticipated to be 65 or over at the end of the period given.