The charts below show the percentage of water used for different purposes in six areas of the world.
Summarise the information by selecting and reporting the main features and make comparisons where relevant. 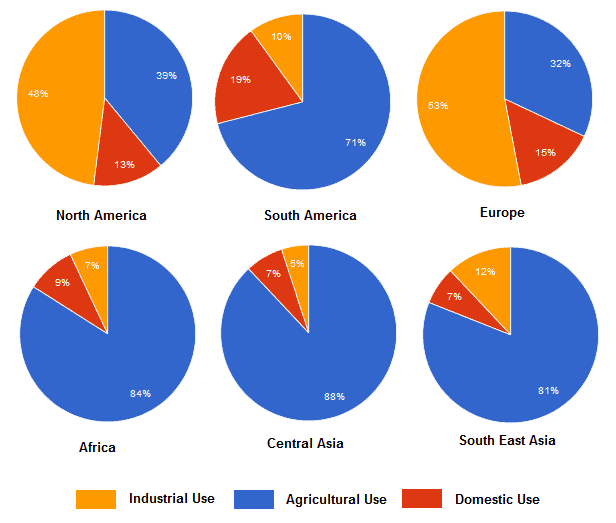 The provided pie charts illustrate the water consumption in different sectors in six major parts of the world.

It is noticeable that agriculture uses the most water in almost all the areas except North America. Also, domestic use makes up the smallest percentage of total water consumption outside of South America.

Regarding agriculture, Central Asia is the region with the highest proportion of water used, at 88%, followed by Africa and South East Asia, at 84% and 81% respectively. Meanwhile, the figure for North America stands at 39%, which is 7% higher than that of Europe and 32% lower than that of South America.

Domestic water use is highest in South Africa, making up 19% of total consumed water in the region while the opposite is true for Central Asia and South East Asia, at only 7%. The figures for the remaining regions do not exceed 15%. In regard to water consumption in industrial sector, Europe is the leading consumer, at 53%, followed by North America, at 48%. The proportions of water for industrial use in the other areas were significantly lower, with Central Asia being the lowest, at 5%.