The charts below show the percentage of volunteers by organizations in 2008 and 2014. 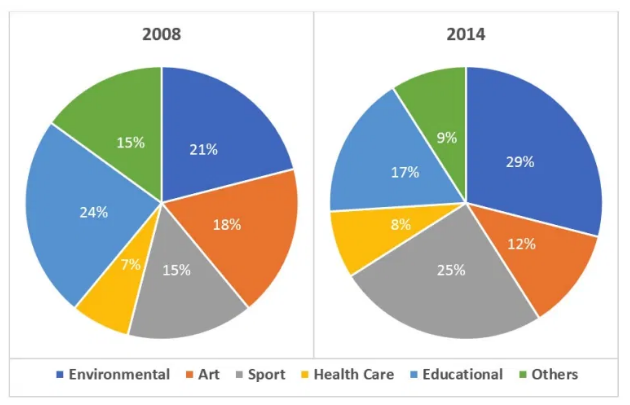 The provided pie charts illustrate the percentage of people doing voluntary work in various organizations in 2008 and 2014.

It is noticeable that the figures for volunteers in Educational, sport and health care organizations decreased while those in Environmental, art, and other ones declined over the 6-year-period. Also, Heath care remained the least attractive area to volunteers.

In 2008, almost a quarter of total volunteers worked for Environmental organizations, followed by Education, at 21%. The percentage for Environmental dropped by 7% to 17% in 2014 whereas Education witnessed a dramatic jump to 29%. Sport sector, which attracted 15% of voluntary personnel, experienced a remarkable increase to 25%., making it the second most favorite sector after Education in 2014.