The charts below give information about the price of tickets on one airline between Sydney and Melbourne, over a two-week period in 2013. Summarise the information by selecting and reporting the main features, and make comparisons where relevant. 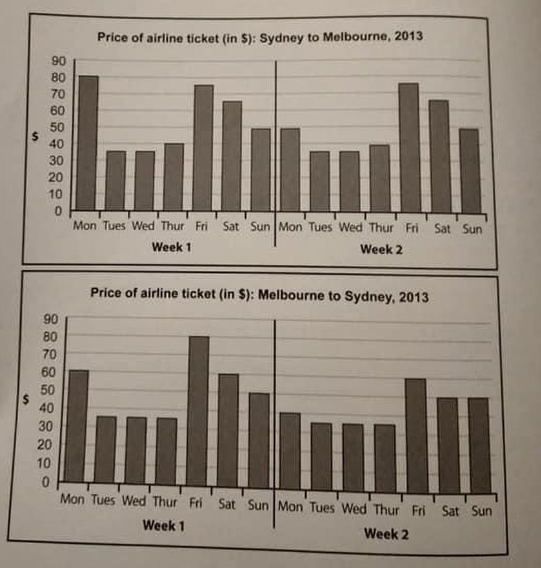 The provided bar charts give data about ticket fares on one airline travelling between Sydney and Melbourne in 2 weeks in 2013.

It is noticeable that price of tickets were lowest on Tuesdays, Wednesdays, and Thursdays while people had to pay more on Fridays and weekends. Flights between the two cities on Fridays were most expensive except for week 1 from Sydney to Melbourne.

With regard to flights from Sydney, people spent $80 on Monday in the first week whereas the ticket price was significantly lower, at $50 in the second week. The figures for Tuesdays, Wednesdays, and Thursdays were not higher than $40 in both weeks while it cost people almost twice as much on Fridays, at $76. Tickets on Saturdays and Sundays were offered at a remarkably lower rate, at $66 and $50, respectively.

Regarding flights from Melbourne to Sydney, there was a similar pattern as ticket fares stayed lowest at $35 from Tuesdays to Thursdays in both weeks. There was a sharp decline of 20 percentile in ticket prices on Mondays and Fridays between the two weeks while the travelling cost was no more than $60 on Saturdays and Sundays.

IELTS ideas 04: The importance of music