The charts below show the percentage of electricity consumed by different sectors in Eastern Australia in 2007 and 2010. 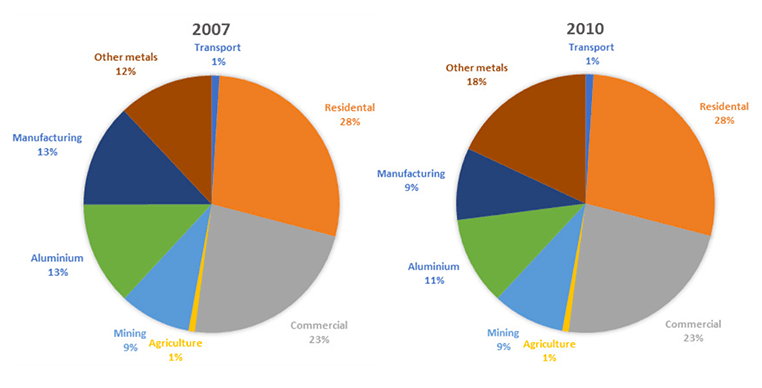 The provided pie charts compare the consumption of electricity in various sectors in Eastern Australia in 2007 and 2010.
It is noticeable that residential use made up the largest proportion while the opposite was true for agriculture and transport. Other metals was the only sector experiencing the rise in electricity consumption whereas most of the other areas remained the same.
In 2007, 12% of total power consumed came from other metals’ sector, which was slightly lower than manufacturing and aluminium sector, at 13%. The use of electricity in other metals increased to 18% in 2010 while the opposite trend was observed in manufacturing and aluminium as the figures went down to 9% and 11%, respectively.
Residential consumption of power accounted for 28% in 2007 while the percentage for agriculture and transport stood at only 1%. Commercial sector constituted slightly less than a quarter of total power use, which was 14% higher than mining industry, at 9%. The figures for all these sectors remained exactly the same in 2010.