The chart below shows the average cost of monthly contract for four different mobile (cell phones) in a European country from January to September 2002, measured in euro. 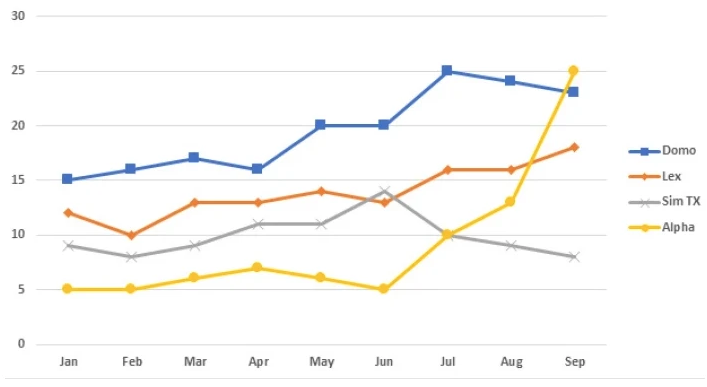 The provided line graph illustrates the average cost of monthly plans from four mobile providers in a European country in the first 9 months of 2002.

It is noticeable that the monthly costs experienced an increase, except for that of Sim TX over the shown period. Also, despite starting at the lowest rate at the beginning, Alpha became the most expensive option at the end.

In January, people had to pay the most money for Domo’s monthly contract, at 15 euros while the opposite was true for Alpha, at only 5 euros. Alpha’s average cost, which fluctuated slightly from January to June, went down to its original 5-euro plan before surging to 25 dollars in September, making it the most costly mobile contract.  Domo consistently remained the most expensive plan from January to August before dropping to 23 euros, ranking the second most expensive plan.

Lex’s monthly cost stood at 12 dollars in January, which was 3 dollars higher compared to that of Sim TX, at 9 dollars. The figures for the both providers were relatively close in June, at around 13 euros per month before showing opposite trends onwards. Lex’ average cost jumped to 18 euros in September whereas Sim TX offered the lowest rate to users, at 8 euros.